Indian art is amply rich and varied. It has been so over the centuries. The purpose of Indian Art, like all folk and traditional art is primarily to instruct men in the great first causes which govern the material, spiritual, and celestial worlds. Art is dedicated to communicating these great truths to mankind. In India including Uttarakhand, art like life is closely linked to religion. Indian art as well as the art of Uttarakhand is life as interpreted by religion and philosophy.

As Dale Maurice Riepe (1979) has said, It is correct to say about Indian philosophy that it developed its own logic, the syllogism analysis of fallacies, epistemology of various types, a great variety of metaphysics, various type of ethical systems and today it forms a battleground of competing viewpoints, most of which are subjectivist and idealistic, but which are shifting toward realistic, naturalistic and materialistic viewpoints. Art and Philosophy are interlinked.

In philosophy, we de-emphasize facts and information. We are concerned, instead, with our methods of reasoning about an issue. In this regard we are looking at a basic question i.e. what is Art? to get the answer in philosophical reasoning and method. There are no right answers here. Instead, we are looking at ways of reasoning about that question. Having its own Art and Philosophy India, including Uttarakhand, has played a vital role in the art world.

What is aesthetics? In this course, we are using aesthetics as synonymous with philosophy of art. This is a neutral term that emphasizes aesthetics as a methodology – a discipline – a way of raising issues and problems and of developing methods of reasoning to address those issues and problems. It does not involve agreement with any particular critical theory about what makes art good art. Indian artist have gone through different phases to express their art. Is it the idea in the artist’s mind that is brought outside? Is it the idea in the mind of the observer that is stimulated, clarified? How is the existence/reality of a work of art different from other things? How is it different from an ordinary physical object? Has an idea or a dream or a memory or a thought made it different?

Since Uttarakhandiess have been living in a natural environment occupying every ecological niche, arts have played a pivotal role in their day to day life since the very beginning when the history of visual arts in the region began. They have provided a vehicle for their urge for self philosophical expression with a highly diversified and artistic approach.

The present paper highlights all the issues raised above on Indian art with special reference to Uttarakhands art. Uttarakhand is a newly created 27th state of the Indian union. It also reveals the philosophical points which are important for expression in the field of visual art and liked by the people of the country. How art and philosophy mingle with each other is an important aspect of the paper. 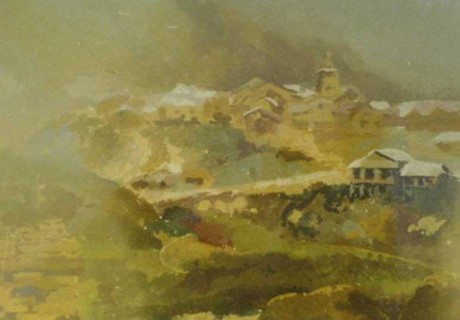